Poised with the same team as yesterday in the Hang Space awaiting the General Session, plus a couple of extra faces. The raised desks and UK plug adapters are well set up for the blogger types. 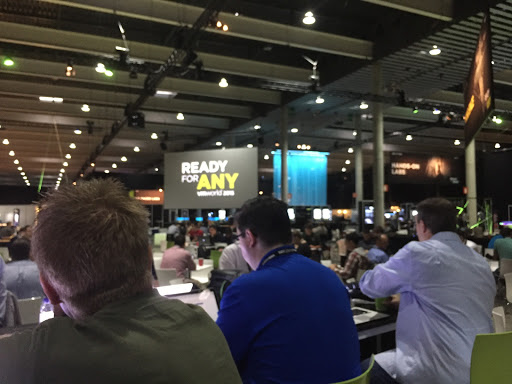 The cloud academy video from US VMworld opens up proceedings again, so I am expecting Carl, but it’s Sanjay Poonen, without people dressed as clouds or apps. He even slips in a Louis Suarez comment, but I didn’t bite. Haha. The focus moves to mobile very quickly and any app any device is again the theme, with commentary on how users and IT have been opposed over the years, users wanting freedom and diversity,with IT wanting control and uniformity. Sanjay tells us that VMware is the only company that can bring you any application on any device. 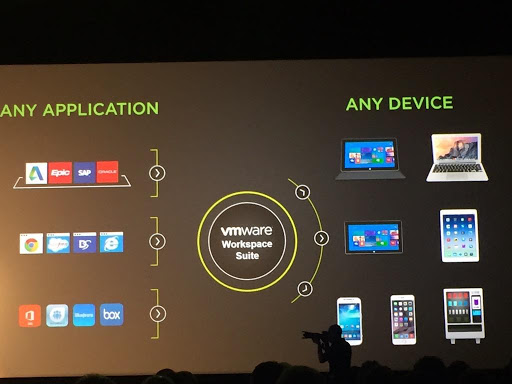 Then Sanjay announces the acquisition (this morning) of boxer, an email client which you can find at least on the Apple app store (as I just found out) which seems quite like the mail functionality you can see on your phone already. It’s on the Android app store as well. I’m having to download this to see what the big differential is. You can customise your swipe actions, I hope that’s not it. The intro at VMworld was pretty quick, but boxer offers integration inside your mobile mail app with a bunch of other well known, well utilised apps, such as twitter, dropbox and box, Evernote and so on and allows you to amalgamate your mail feeds from Exchange, apple, google etc. like most mobile clients do.Looks like it is going to slot right in to Airwatch, so this will be an interesting play..

Still, any further commentary on that during the show had to wait, as I had to reflect on Sanjay singing “let it go” from Frozen to the two people in the crowd who admitted to still using a Blackberry device. It gets worse, I promise.

The astute among us noticed that when the EUC live demo run by Rory Clement (Director, Solution Engineering) started, a laptop being shown was a Dell, so eveyone is right on message already. The Project A2, or “Project A squared” initiative does look really good though, with application management on both your phone and your Windows 10 device being done from the same place. Airwatch (mobile management) and App Volumes (Windows 10 management) together making A2 The integration of vIDM, the VMware Identity Management application (for single sign-on) on with this platform and leveraging the applications shown on the demo (like docusign) are planning to make mobile really useful as a real replacement for the traditional desktop, something I have struggled with myself this VMworld as I chose not to bring a laptop with me to see how I would cope with just a phone and a tablet (not so well, as it turned out). Then to get really mobile, we are shown windows applications running on the screen in a Tesla. Not just any app, 3D modelling rendered out on to the client from an Nvidia equipped server. Then to cap it all, drummers on stage and an audience participation of “EUC will Rock You”. I am not sure how well it went down in the General Session hall itself, I think something was lost in translation in the Hang Space, although one keen soul joined in.

Follow that Martin! Well, Martin had clearly decided not to follow that at all. Unfortunately I had to head off at this point, so did not get to see a lot of what followed. There were, however, plenty of tweets about what followed. A highlight for me being the positioning of NSX to be the link providing connectivity between multiple clouds. Private Cloud - vCloud Air - AWS - Google - Azure.