Kicking off the conference in the best way possible is attendance at TAM day (or Partner day if that’s your thing). TAM day is a relatively structured day with a number of sessions and of course, that access to the other parts of VMworld which are open on the Monday. There’s a growing number of people arriving on the Monday who are neither TAM nor PEX attendees, but there’s other conference activities to keep them going too.

One of the things going on early in the week is the Hands-on-Labs, a staple of every VMworld. A number of brand new labs are released at VMworld each year and in some cases, new ones appear during the show, too. Take a look at the HoL site for a guided tour through some of the newly announced products from this year. For a lot of people, this is a distraction-free place where they can go play with something that they don’t use every day. I hit the labs early on and that was a good plan, as the place was totally full before 11AM. On the Monday. Clearly HoL is quite a popular thing. This year, I took a look at a spot of vRA 7, which was nice. I got to meet up with some of the big hitters from the LonVMUG CloudCred team as well - pictured below with the Queen of CloudCred herself, Noell Grier. 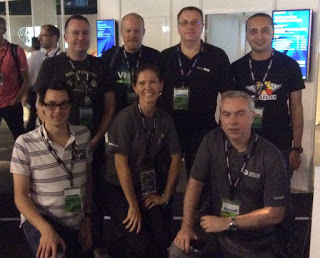 Admittedly, this meant that I missed Joe Baguley’s TAM opener (sorry, Joe!) but I’ll ensure that I catch him at the VMware User Group UK UserCon instead. As usual, this is taking place at the National Motorcycle Museum, Birmingham. This years UserCon is on Thursday 17th November, with the vCurry the night before, please go and register, thanks for listening!).

There are also meet the expert round table sessions scheduled on TAM days and this year, there were more of those than ever before. Lots of VMware shirts in evidence and lots of attendees to ask them questions. Excellent stuff! This was something that the TAM customers had asked for more of at the previous VMworld, so it was great that VMware acknowledged this and changed the format accordingly. The other networking opportunity during the day is at the lunch, where I got the chance to have a chat with a bunch of folks from the UK and again, talked VMUG and also just shared some tips and info on VMworld as a whole. I’m still in awe of the number of folks in this community who have helped me, inspired me, motivated me over the past few years, so anything I can do to pay that back to help others is something I always enjoy.

Another good part of TAM day is the “Wrap-up with Pat” bit at the start of the Customer reception. Joe Baguley starts the day and Pat Gelsinger finishes it. Each year I’ve been to VMworld Europe this happens. It’s heartening to see the commitment from VMware C-level Execs to their customers, partners and the other ecosystems that they have built over the years. Pat hung around to chat with attendees, rather than just doing a few minutes on stage. This is all taking place a day ahead of the major announcements slated for the next day, which is great!

I just had enough time to get “home” to my apartment to get ready for the VMUG Party. As a new leader for 2016, this was a must attend for me. so I could meet a whole lot more VMUG leaders and folks from the VMUG organisation itself. That was a great party, the dancing robots were a highlight (err, it was actually people dressed more or less robot like) with a good light show and some laughs. Also more Joe Baguley, that guy gets everywhere. Then it was time to head for the Pernix Nutanix party with the NE UK VMUG Leaders and a bunch of the @OpenTechCast guys. I was pleased to see that this party retained a format very much like the previous years and at the same place also, Ocana, just off Las Ramblas. The Pernix party was my favourite party of the week from both of the previous two years, because of the calibre of the guests and the amount of good conversations you get to have there. I think it was also my favourite this year too. Apart from those hideous mescal shots. Bart, I said Mohito, not mescal or mealworms!!! Yuck.

A short walk home from there and done.

The only disappointment about Monday is that in choosing to go to the VMUG party, I did not get to go to the Hackathon. This event followed the same format as Alan Renouf and William Lam put on in Vegas for VMworld US and I made sure that I had a good chat with a number of the folks who went to this in Barcelona. Everyone had a great night and the whole thing overran “terribly” which hopefully means that this will make a reappearance next year. It should, given the count of people who said that this was their highlight of the week.