The last day of the show is always the quietest day. Some people are travelling home early, there’s less sessions around, certainly no parties after hours to plan for, the solutions exchange gets torn down and basically, everyone’s knackered.

My Thursday was relatively gentle, as a reflection of all of the above. I did have a few sessions booked, but in the end, I ducked most of them, other than the mandatory TAM session, as everything is available online afterwards and there were still some vendors to see, some conversations to have, some people to catch up with, generally some time to be sociable.

First things first though, a TAM session with GS on SRM. I’m a fan of SRM, not just for the obvious automated DR solution that it offers, but also for the uses that it has for disaster avoidance or datacentre migration as well. This session again touched on some of the new features and some of the “what’s next” features. I’d say that the thing I am liking most about SRM at the moment is the SPBM related functionality - pick a storage policy for your new VM and if that policy is one involving DR protection, then SRM will automatically protect that VM for you. This is just one of those things that suits someone such as myself, as you get on in your career, you cannot be involved in the minutiae that you used to. Far better to have someone else building a VM and know that the policy you designed will ensure that it is protected than having to do all of that yourself.

Then basically, more time in the solutions exchange and the bloggers space. I finally managed to snag one of the most important items on my hitlist; Solidfire’s Cards Against Humanity pack for vExperts. I’m an analogue gamer, so things like this are always very well received! Thanks guys.

The VMUG stand had been a place that I could head to across the week to see some friendly faces, have a sit-down and a chat with some of the other leaders or with folks passing by and again the Thursday was no exception to this. As the show wound down, I had plenty of time to kill before my flight home, so I was able to pitch in and help pack up the stand. Booth duty at last, I guess :-)

The VMworld Thursday is also a time for reflection. It had been an awesome show, for once the Europe announcements eclipsed those of the US show a few months previously, personally, I’d had more opportunities to do more things than ever before. Looking back at a reply I’d sent on Twitter in the lead up to VMworld; 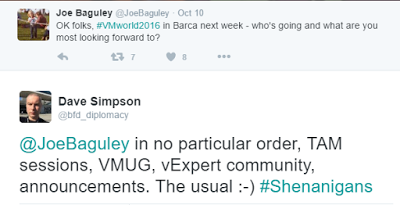 I think I hit my targets.

And not forgetting this…

I’d missed the “Destination Giveback” in the hangspace and was wondering what was going on this year, as there’s always something at VMworld of a charitable nature and this was it. “My machines are virtual, My impact is real”. You can take a lot of t-shirts home from VMworld and there’s only so much painting and decorating or gardening that you can do in a calendar year, so it was nice to have the option to buy a shirt that actually means something to someone. The Princes Trust should do rather nicely out of that, hopefully.

My biggest regret, well, maybe not being able to get in to this… 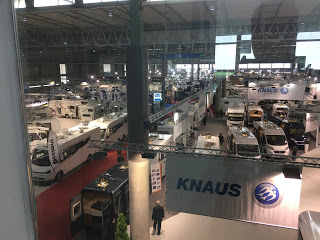 But it seems no-one else could get in there either. Empty all week from what I could see. Cracking!