So the day has come, the great and the good of the VMware community are all gathered in Barcelona for another VMworld Europe and as much as there’s been a whole bunch of chat, beers, sessions, training, exams and catching up going on (including PEX and TAM Day), the keynote marks the transition from all the “preliminaries” to the actual show proper. More on that soon, but first, the vBreakfast! I’d put my name down for this in the past and not made it, but this year I was determined to get to this meeting of people crazy enough to get to the Fira for 7AM! And it was raining too. As usual, the vBreakfast was superbly organised by the Austrian user community - embodied this year by Andreas Lesslhumer and generously supported by Runecast - Thanks Stan!

Here’s a picture of some of the early attendees, but more and more folks kept arriving through the whole 90 minutes, which was great! 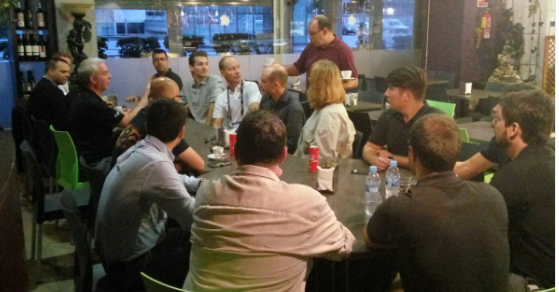 Nice to see a great introduction to VMUG before the live part of the presentation in with the slides on the Global Platinum and Gold sponsors. Thanks, VMware! 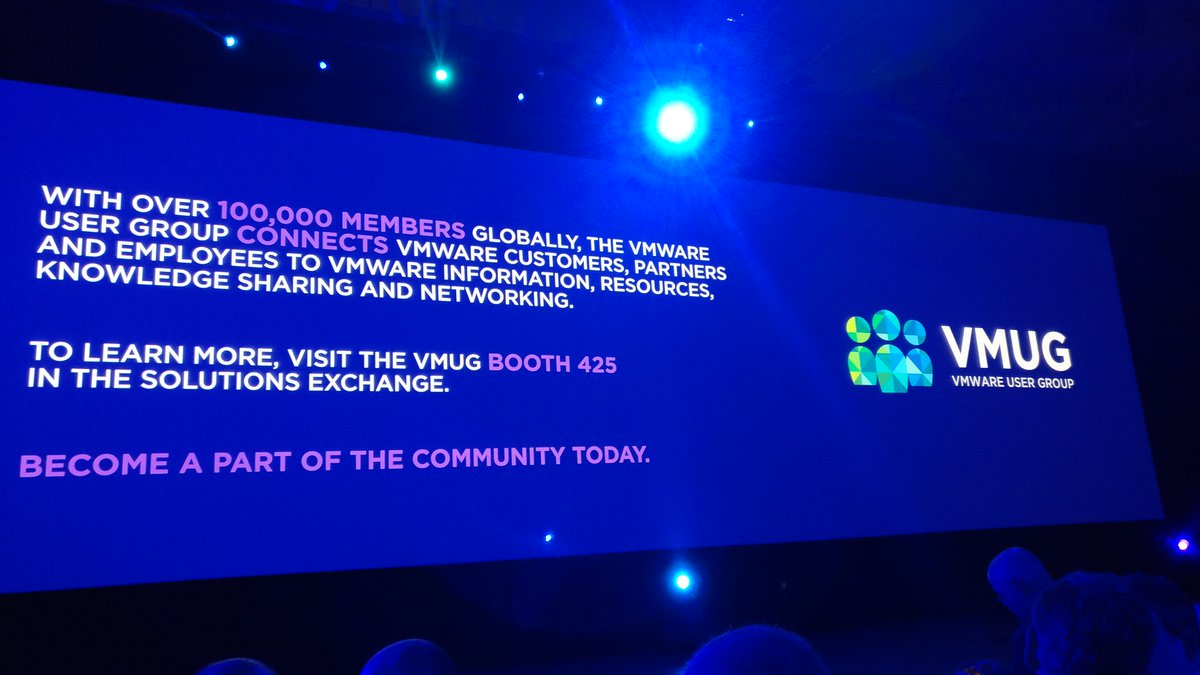 Interestingly enough, I later found out that having the question in the VMworld signup form asking registrants if they would like to know more about VMUG garnered hundreds of new signups, so having the above slide in the keynote and the keynote recording will help more people learn about what VMUG is.

Then let’s get on with the show. Ladies and Gentlemen, please welcome…Jean-Pierre Brulard (SVP & GM EMEA).

As in the past, Jean-Pierre is out first and he welcomes everyone to Barcelona, covers diversity and invites everyone to post their faces on Twitter for a chance to win a meet-and-greet with the Kaiser Chiefs who are playing the VMworld Party tomorrow night.

Jean-Pierre moves on to introduce Pat Gelsinger and Pat launches in to a similar session to the US keynote, with the outstanding advances we are making in tech globally, photon entanglement “teleporting” photons into space, Korean workers in exoskeletons, driverless cars. Interestingly, I didn’t pick this up from the Vegas keynote the week before last, but Pat mentioned that we only have 10% of shopping done online, so there are still a lot of retail operations which have not gone through any amount of transformation. Then 5G and the huge change that this will bring to everyone as it gets rolled out in the near future and now into NFV for Telco’s. VMware Integrated Openstack 4.0 is mentioned, with a new range of features in that area. A lot of the largest telco’s in Europe are next up on a slide and Pat mentions that the largest telco deal that they have signed is with Vodafone, a European telco.

There’s a lot of scope for virtualiation to sell into the Telco space as there’s a lot of physical servers out there in telco land, hence the focus that VMware has been placing on this area in the last year or two and will continue to do so, I imagine, until the same saturation is achieved as in enterprise datacenters.

We pass through a chunk more content from the VMworld US keynote, including the three R’s (Read, Rite code and Rithmatic) and the reduction in the percentage of US citizens engaged in farming dropping from 85% to 2% of the population.

This time around, when we have IBM on stage with Pat, they are introducing VMware HCX Technologies - a new announcement. “VMware HCX technologies deliver secure hybrid cloud for seamless app mobility between vSphere versions, on-premises or in the cloud.” says vmware.com. It’s designed to allow companies to carry out large scale migrations of applications between vSphere versions and VMware clouds (both plural). Good to see additional developments in the relationship with the IBM Cloud here, rather than all of the focus being on AWS, since the IBM deal is a lot older. To me this is further proof that VMware are bringing products to market which will give their users the tools to manage the “Any Cloud” part of the “Any Cloud, Any Device” mantra that they’ve mentioned for the past couple of years now.

In other new news, Pat discuss the new VMware Cloud Verified Partners. 5 partners, including IBM (again), OVH (again), Rackspace, CenturyLink and Fujitsu are first out of the gate here, I expect that more will follow.

Now enough of that, as up on stage comes Alan Renouf, continuing that international feel, with a demo of the “Virtual Virtual” VR management interface. It’s great to see this live as I had heard a lot about it in the run-up to the EU keynote from the podcast appearances that Alan made before the event as well as some feedback from the US session too. Fun to see VMs being deleted, migrated and flung around from on premises to VMConAWS, too.

Always two there are, a master and an apprentice… 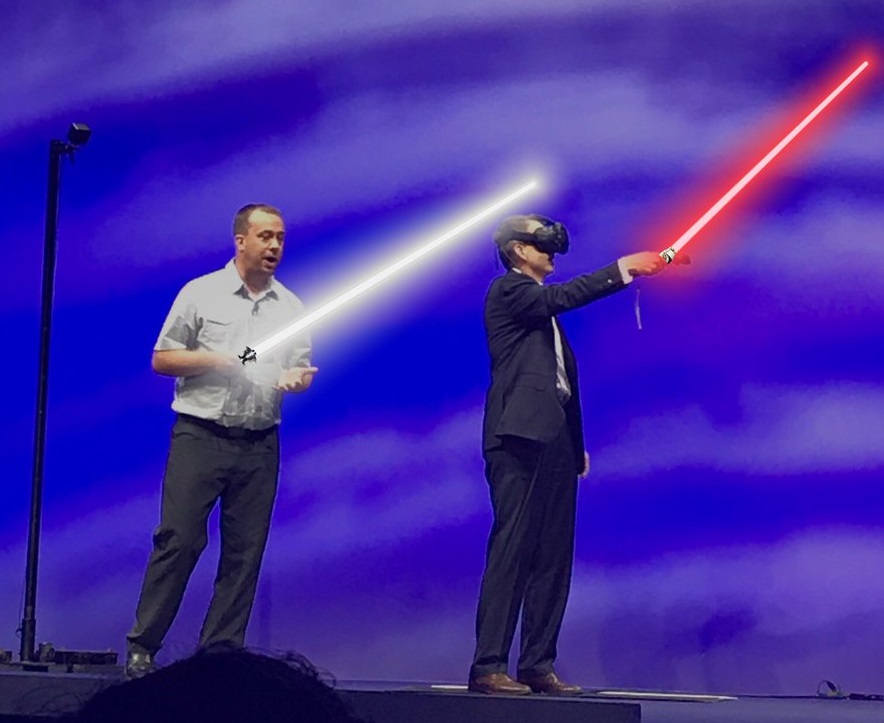 OK, so that was just one reaction on Twitter to this demo, but there was a lot of discussion about it there (twitter blew up) and also a huge amount of chatter at VMworld itself) so in all seriousness, it was very cool to see how easy it was to demonstrate moving a VM into the cloud in a VR environment. This whole project was something that started in an internal VMware hackathon and was subsequently continued by Alan in a series of late night coding sessions. Alan is a great exponent of the VMware Community, VMUG’s, the hackathon and basically everything good about what we do as a community. Great to see you up on that platform mate! I’ll definitely be looking at this in future as all the code’s going to be made available on Github shortly and you just know that this is the sort of project that won’t be short of further contributions.

One tweet from Alan himself, which I found quite poignant… 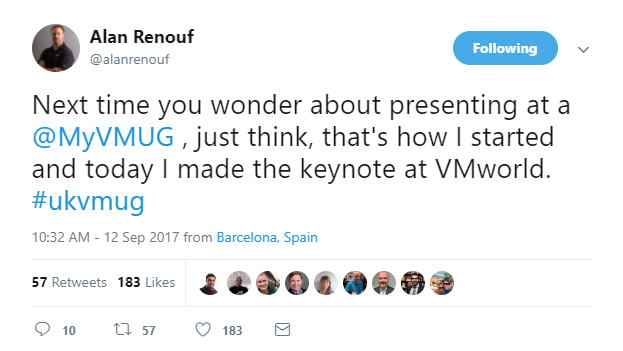 There is a VMUG theme threading it’s way through this blog post, through this entire week even, so if you found anything about this part of the keynote or the VMworld Hackathon even remotely inspiring, then take the chance to present your thoughts and experiences to your peers. There is a massive amount of support for speakers at VMUGs (on the day) and as much support beforehand and afterwards, so although I’m not sure I can get anyone on stage at VMworld for next years keynote, I can guarantee that I can help get you on the right road! I’m not the only VMUG Leader or blogger saying this, I’ve seen numerous other offers of support or of mentorships on twitter this week alone.

I’m sitting in the VMTN Community area writing this, so there is a lot of conversation going on between the bloggers which is always one of the benefits of not actually physically being in the keynote itself. Happily this year with layout changes, it was easy to get to the VMTN Community space and get set up on a table all ready to blog and contribute to the commentary around the keynote without having to beg or cajole folks to let us in - a welcome change.

Now on to Sanjay Poonen, with Liberty Global and Swisscom, so could be interesting, but sadly those of us in the VMTN Community and the other tables around the “hang space” (which have filled considerably since the keynote started) cannot hear all of the discussion. Instead, I’m filling the time talking VMUGs and hackathons and VMware Code, with the assembled community folks there. Suffice it to say that there are irons in fires, so hopefully something good will come from this in future - watch this space!

For a commentary on this from a blogger with a blogger pass and the advantages that brings, allow me to point you at Chris Bradshaw’s excellent Tuesday Keynote post.

By the time I was done with all of this, the keynote was over, so time to shift my arris and my focus over to VMUG. A run into the solutions exchange, say hello to the staff on the VMUG booth and then off to the VMUG Leader Lunch. This was a chance to catch up with leaders from across Europe (and beyond) and also to hear from Pat Gelsinger and Joe Baguley who once again generously gave the assembled leaders their time and faced up to anything we cared to ask them. Hopefully a bunch of you reading this will see the benefits of the things that were discussed here over the course of 2018 and beyond.

Following this, it was time for some sessions, you know, what a lot of people generally come to VMworld for. As per basically every year since I started coming to VMworld Europe, it was time for me to pick up some TAM Sessions at TAM Customer Central. These are not your normal sessions with hundreds of people in row upon row in huge rooms, they are small, intimate, round tables with Product Managers and Senior Developers and are often a means for VMware to garner feedback from the user community about the way their products are heading as much as it is an opportunity for them to disseminate information. I’m a massive fan of the entire TAM Program and once again, I was not disappointed here. I got involved in sessions on VMware Validated Designs and on vSAN, which were both excellent. If you have a TAM and you don’t go to TAM sessions after TAM day, or you don’t go to VMworld at all, then I strongly suggest that you do so in future. I go to VMworld for this above anything else (even VR).

Suddenly, the “day” was over, the Solutions Exchange was still full, but Chris Bradshaw and I realised that we were a long way from the vExpert Party, so in what turned out to be an all too common situation, I headed back to my apartment for all of 10 minutes before heading out to Monaco, I think it was, in cahoots with Chris, for the vExpert Party. A little rain did not dampen spirits and I had a great time here with the VMTN Community staff (thanks for all you do for us folks, it is really appreciated!) with my friends from the UK and Italian VMUGs and a raft of vExperts from different corners of the planet. 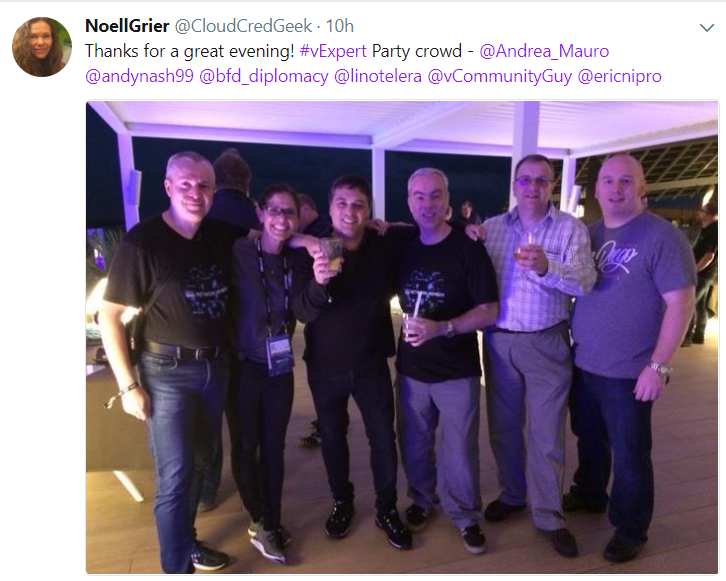 Here’s the assembled power of VMTN, Team LonVMUG and Team VMUGIT. Community above all.

Then, armed with a number of mission objectives, I headed on over to the VMware UKI party with a bunch of the UK’s VMUG Leaders and Speakers, to what was actually the first time I’d been anywhere at a VMworld with this many of my “local” VMware representatives in attendance. More useful conversations were had, even at this late hour. Again, more should come out of this during the coming months, but the day ended with me quite happy with the state of the relationship I have with VMware as a VMUG Leader and the benefits which that can have to the VMUG community as a whole (both current and future people). 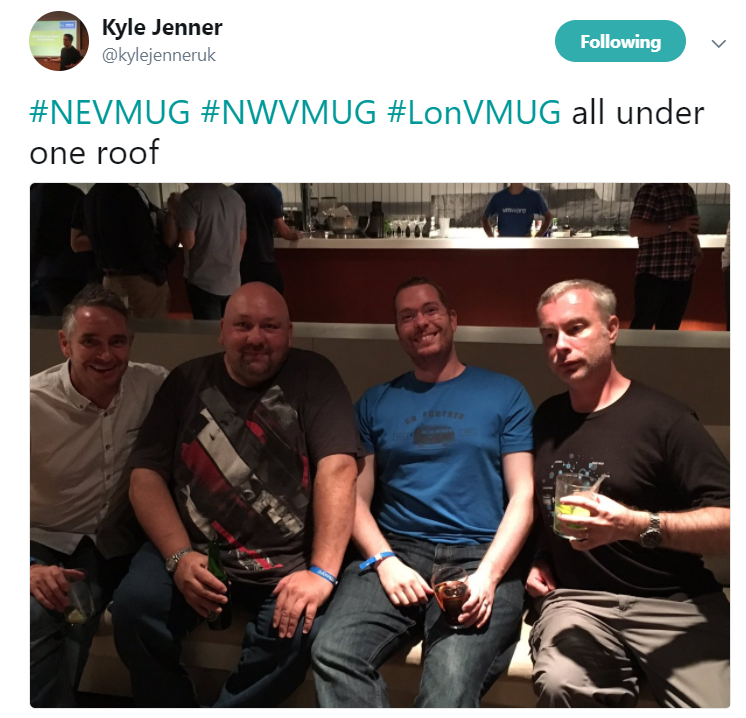